I will be sending this jewelry set out to my sweet friend, Bren, soon! 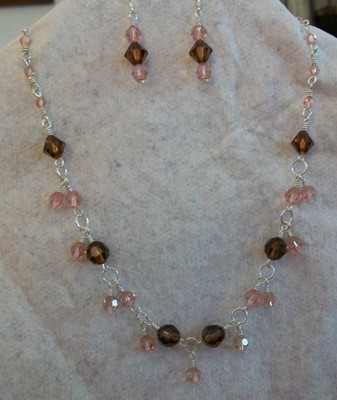 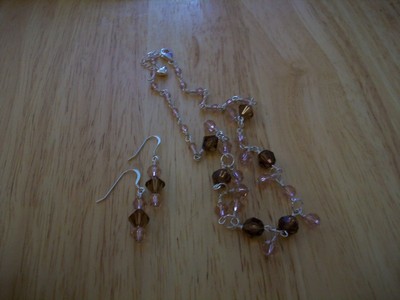 And
after my having a major "uh oh" in the creative process, let me tell
you that Bren is not only sweet, but she is also a very gracious woman!

You see, I created the entire necklace and the earrings in the wrong color!!!

When I finally realized it, I moved heaven and earth to find the right
colors and make another set.  When I told her what I had done, she
wasn't even offended; and was very kind.

What a good friend!

The only thing I could think of was that the pain I've been in lately
must've muddled my brain and thinking processes far more than I
realized!

So,
they say confession is good for the soul…so I should be feeling "less
stupid" really soon, then, right???  I certainly hope so!!!

God
says that He gives us beauty for ashes. (Isaiah 61:3)  That brings up
such great pictures in my mind.  And so, out of my mistake, I have an
extra necklace.  I've added some things to it, and posted it on my Etsy
shop.  I am hoping that it sells.  Doug says it may be the prettiest
thing I've done yet.  He's a little biased, I think, but I'll take
it!!!

My pain
level seems to have "leveled" out these days.  I wish I could say that
it's disappeared, but not yet.  My doctor did say that I could continue
the muscle relaxers, with no ill effects, so I am doing that.  They do
seem to help a little bit.

Isaac had a FABULOUS day at therapy
yesterday!  We are finally starting to see some of the things that he
was doing before he became so ill with the seizures early in 2007.  It
is exciting to see progress again.  It has been a long road of recovery
for those skills.  It's amazing how the human brain can relearn those
things!  Praise the Lord for that!

I pray that you all have a great weekend.
Alesha

You can find me here:

Rebates with Friends – Come Shop with Me!

Rebates with Friends – Come Shop With Me!

Get Cash Back on every purchase you make! Click here to learn more!

As an Amazon Associate I earn from qualifying purchases.